All I Am Saying, Is Give Him A Chance

Reading the liberal blogosphere lately is like watching a unshaven, manic-depressive cannibal try to eat its own foot. 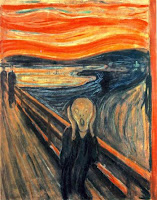 Obama picks Rahm Emanuel, and people go: "OHMYGOD OHMYGOD OHMYGOD so much for bipartisanship!!! Rahm's gonna eff up EVERYTHING with his fuzzy haircut and big, fat, sharp-elbowed 'tude!!!!!1"

Then Obama steps in to spare Lieberman's chairmanship and people go: "OHMYGOD OHMYGOD OHMYGOD he's isn't being partisan enough!!! He's gonna be such a wuss and sell his soul to Dick Cheney!!!!!1"

Then Obama starts making a case for bailing out the auto industry, and people go: "OHMYGOD OHMYGOD OHMYGOD he's being a big careless spender and trying to Sovietize America and OMF'nG maybe that be-beehived genius Sarah Palin was right about the socialism business and I'm so disappointed in life I can't stand to watch the Wolf Blitzer show any more because my liver hurts from how drunkenly depressed Barack Obama is forcing me to be!!!!!1"

Then people notice that Obama's making a few hires with experience under Clinton and people go: "OHMYGOD OHMYGOD OHMYGOD he's not really going to create change! He's just going to be Clinton No. 2 and he's going to hire Terry McAwfullife to be the Secretary of Selling Out To The Man!!!!!!!1"

And, you know, talking about issues is fine, sure - but, PEOPLE, COME ON, none of this is an indictment on his whole bleepin' presidency! He's not even president yet! He won't be president for two months even!

We just won the election, folks! Liberals nationwide should be reveling in this! Having to decide what to do with our newfound immense power is an excellent problem to have, aft 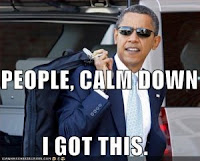 er all. You know, the kind of problem that's you want to have.

This is part of what drives me nuts about my fellow liberals sometimes. (And I suppose I'm not helping with this post... but ah well!) There's so much nervousness, and panic, and worry, and freaking out over who did what the wrong way before they even began, that you'd think the Republicans were not only still in control, but Bush had just dissolved the constitution and declared himself Grand Poobah/Eternal Warlord of North America, Baskin Robbins and the Moon.

At least give these people a chance to fuck up before you tell them they fucked up, kay?
Posted by Sinistral at 10:48 PM

This is who we are, Sini. "Republicans want to fall in line, Democrats want to fall in love." Leave it to the Pubbies to reflexively pronounce good everything the Dear Leader does. We'll keep to our principles and be disappointed if it even looks as though our guy isn't going to do precisely what we'd want him to. It doesn't mean we're panicking or about to join the opposition. It just means we have standards.

Obama hasn't publicly supported the automobile bailout. In fact, he's proposed fast-tracking their bankruptcy. His words haven't won the hearts and souls of union households. It's Bush, not Obama, who's asking Congress to step in and help Detroit. The party the unions have supported for decades is ready to turn their backs on them.

It's unfortunately not as simple as pro-union vs. anti-union, here. It's a matter of what we can expect from the corporate leadership that started this mess, Anonymous.

If we give billions to an industry that does nothing to change, we'll have accomplished nothing more than wasting even more money. If there is a fundamental change, well then people grumpy about corporate welfare, like me, will forget about it and move on - especially if the money is paid back.

Ignore the Big Three and let them fail at your own peril. Trying to bring the country back from recession is going to be a lot harder if you flush 3,000,000 auto related jobs down the toilet. Additionally, the Democrats can forget about ever asking unions for their votes again. I've been a Yellow Dog Democrats for 25 years but if they screw my pension over, they'll lose my vote for life. Making demands from the Big Three wouldn't be that big a deal except for the hundreds of billions thrown at Wall Street with no strings attached. Nancy Pelosi and the Democrats in Washington are proving to be bigger hypocrites than the Republicans ever were. At least the Republicans took care of their friends. I can see why the Democrats wanted Joe Lieberman to stay in their caucus. His character fits right in with the rest.

That's all well and good, but you still have to explain to me how bailing the big three out is going to make people buy more of their cars.